Our center will be closed until further notice. Still offering Meals On Wheels. 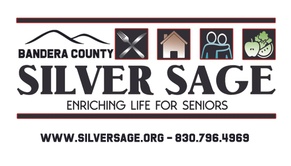 Silver Sage was founded in 1977 by a group of twelve women who met to socialize, play games, and eat together. The first meetings were in the vacant Baptist parsonage. Eight years later, the group had outgrown their original space and, with the aid of Bandera County officials, moved to a larger building on 11th Street.

The meals program began in 1984. The Dietert Claim Senior Center in Kerrville provided meals which volunteers distributed in Bandera. With the help of the Kerrville State Hospital and Dietert Claim Senior Center, the group organized as the Bandera County Committee on Aging and received their 501 (c)(3) status in 1984. By 1997, the 11th Street Site was no longer adequate.

The Board of Directors and the Executive Director of the Silver Sage organized a long-range planning committee to anticipate the needs of the rapidly growing senior population and to recommend solutions. The planning committee was greatly assisted by a study conducted by the University of the Incarnate Word (San Antonio) which gathered extensive demographic data and made recommendations for funding resources. Based on the findings, it was decided to build a senior center with craft rooms, kitchen and dining room, offices, and a great hall for meetings and special events.

Mr. Reagan Peterson donated land. The Kronkosky Charitable Foundation and other foundations, along with support from local businesses and individuals, made it possible for the new building to open its doors, debt free, in April 2003. The beautiful Silver Sage was ready to serve Bandera County.